Infant colic is usually seen as: ‘an abdominal pain with spasmodic cramping – lasting from a couple of weeks to six months‘ and usually until your baby’s digestive system matures fully.

Studies have shown that 25%-40% of babies suffer from colic usually between the ages of three to thirteen weeks of age. It affects breastfed and formula-fed babies equally.

A baby with colic may:

These episodes can occur at any time of the day or night, but typically begin late in the afternoon or early evening. This is because they have been feeding all day. 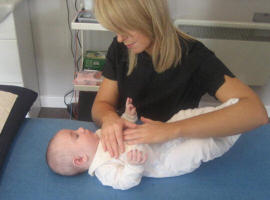 Tom presented to me at 4 weeks old. He was quite colicky and was restless most of the time, with pain coming in waves especially after feeding.He grunted and ‘fussed’ in the evenings. Tom was being formula fed; he would never finish a feed and kept sleeping and snacking proving very laborious for Mum.

Tom had a difficult birth – he was a caesarean baby as he had oblique presentation for the final 2 weeks of pregnancy. During the procedure he had ingested a lot of myconium, so much so that he vomited constantly for the first 24 hours.

Tommy was quite distressed during the initial treatment. I worked on his cranial bones, released restrictions in his neck, balanced the dural tube of the spine and released the diaphragm. A common area of dysfunction in babies with colic, is in the base of the skull behind the ear. This restriction can often affect the Vagus nerve which has a direct impact on a baby’s breathing and digestion.

Baby Tom screamed throughout the 45 mins, brought up a lot of muscus, sweated profusely and displayed Somato Emotional Release (SER)… retained memory from the trauma of his birth. His digestive tract was ‘on fire’ and his nervous system in shock. This is owed to all the vomiting his little body had to go through.

When Tommy and his parents returned, they had noticed an improvement for the first 3 days; he fed better, cried and ‘fussed’ less and slept for longer. His Mum felt like he was a different child both in his form and manner, and alot more settled in himself. These improvements gradually lessened towards the end of the week.

I carried out 4 more treatments and as time went on, Tommy got more longevity from the work and became extremely calm and relaxed. 8 weeks later, Tommy’s parents were happy to report that he was now feeding normally and very happy in himself.

Infant colic may be caused by a combination or only one of the above. With craniosacral therapy, we like to gently eliminate problems that can be related to birth difficulties or the sucking reflex. By doing this, I have noticed a very high success rate using CST – as Mums have normally ruled out the dietary causes themselves.

When I work with Infant Colic – I always consider each of the above in treating the baby’s condition.

Used extensively across Europe, PST is a unique form of... END_OF_DOCUMENT_TOKEN_TO_BE_REPLACED

“I first attended Colette for treatment in my third trimester of pregnancy as I had acute rib pain. Following one END_OF_DOCUMENT_TOKEN_TO_BE_REPLACED