Many babies feed quickly and easily either from the breast (breast feeding) or bottle, with a gap of 3 – 4 hours in between. Unfortunately, this is not always the case. 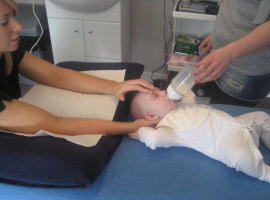 Shane presented to me at 2 weeks old with excessive crying and difficulty in settling. He was breastfed and never satisfied, and Mum was worried that he was not getting enough. He had a normal birth but it was a very ‘quick’ delivery.

The process of birth puts pressure on the cranial nerves (Vagus and Spinal Accessory Cranial Nerves), and can compress the small openings where these nerves exit the head at the base of the skull ie. The cranial base. A quick delivery can worsen this compression.

During his initial treatment: While working on Shane, I was aware of tension in this area of his upper neck, that was putting pressure on the nerve (glossopharyngeal) that supplies some of the muscles of the throat and the largest salivary gland – making it difficult for Shane to swallow and feed.

I then assisted the bones of the hard palate (upper jaw) that were jammed together and preventing a strong sucking reflex. His Mum agreed that he tended to ‘dribble’ and ‘drool’ quite a bit.When these bones became free to move, Shane’s sucking reflex became much stronger.

Through releasing and opening up all these areas of compression, his Mum noticed that his sucking had improved and in turn she had more of a supply for her baby!

I saw Baby Shane three more times and he was thriving. All was well and I advised Mum to check back with me if she noticed any of the symptoms resurfacing.

Used extensively across Europe, PST is a unique form of... END_OF_DOCUMENT_TOKEN_TO_BE_REPLACED