Parents often become concerned about infant constipation when they observe NORMAL changes in their baby’s bowel habits and behavior, which commonly occur around 2 – 6 weeks of age. It’s around this age that the frequency of babies’ bowel motions often decrease, (this being more obvious in breastfed babies). It is ALSO around this age that many babies are first observed to ‘STRAIN’ when having a bowel motion OR passing gas.

It’s not the frequency of bowel motions or straining that determines if your baby is constipated; it’s the consistency of his/her stools.

What is infant constipation?

A baby is considered to be constipated if his stool is firm, dry and pebbly. Crying while having a bowel motion, bleeding from the anus, abdominal pain and reduced appetite can also be signs a baby is constipated.

If your baby’s stool is fluid, soft OR paste consistency, then s/he’s NOT constipated.

Other symptoms include discomfort related to Infant Colic and Infant Feeding Difficulties. Below is an example of an approach that I have found very effective in relieving Infant Constipation: 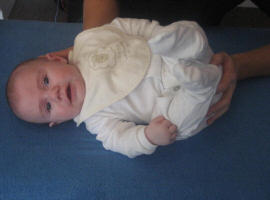 Alex was seven weeks old when he presented with extreme infant constipation – he had a very difficult birth with prolonged labour, the umbilical cord wrapped around the neck, and finally an emergency C-Section.

His first craniosacral treatment was quite upsetting for him. I worked to release the tension within the descending and sigmoid colon, and to balance the pelvic diaphragm. I also balanced the Sphenoid bone in the head (which was very much stuck in right-sided torsion) as well as the Occipital Base which was also very tight. These collectively impact the Vagus nerve which in turn affected his digestive and breathing functions.

Alex cried all through the treatment – which can be distressing – but is quite normal. And much to the delight of his parents, had a bowel movement at the end of the session.

Baby Alex came back for a second visit 10 days later. He had started to “go” on a more regular basis in the meantime, with much less discomfort. This time he slept for most of the 45 mins with the arms and legs splayed out in relaxed pose.

We continued for a third session and Alex was now going twice to three times a day and was both feeding and sleeping on a more regular basis.

Used extensively across Europe, PST is a unique form of... END_OF_DOCUMENT_TOKEN_TO_BE_REPLACED